NEW YORK CITY— The DEADLINE CLUB, the New York City chapter of the Society of Professional Journalists, honored the best of the best in New York area journalism June 7 at the Annual Dinner of the DEADLINE CLUB AWARDS, one of New York City’s most prestigious journalism awards.
Randy Gener won the 2010 Deadline Club Award for Best Arts Reporting in New York – printed, broadcast or
otherwise disseminated in 2009.

The SPJ judges said, "Gener shed light into government censorship and repression of artists. He met the high standards of excellence for journalism and went above and beyond with regards to enterprise, resourcefulness, and overcoming obstacles in pursuit of the story. Congratulations!" 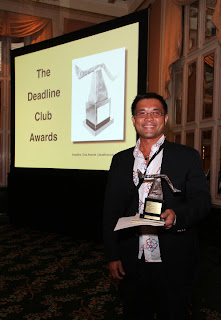 Beating The Forward and The New York Times in the specialized writing category, Gener received a Rube Goldberg bronze statue from Deadline Club president Rebecca Baker and keynote speaker Robert Thomson, managing editor of The Wall Street Journal and editor-in-chief of Dow Jones & Co.
Gener won for "Fomenting a Denim Revolution," which appeared in the May/June 2009 international theatre edition of American Theatre, published by Theatre Communications Group. This magazine article chronicles the plight of the guerilla artists of Belarus Free Theatre who perform underground in Minsk while arguing openly for regime change.

The Deadline Club recognized more than two dozen winners and scores of finalists who were deemed the best in New York area journalism – printed, broadcast or otherwise disseminated in 2009 by news organizations based in and around the New York City area.

The other finalists in the specialized writing category of best arts reporting were Benjamin Ivry from The Forward, for “From the Kol Israel Orchestra to a Pygmy Choir,” and Robin Pogrebin from The New York Times, for “Preserving the City.”

"The competition was fierce, with nearly 300 entries vying for an award, proving once again that New York is truly the media capital of the world," Deadline Club president Rebecca Baker said. "That means that if you are here as a finalist, the judges felt that your work was exceptionally good. You are here as part of a very distinguished group, whether you win the Rube or not. Tonight’s winners and finalists prove that good journalism can make a difference."

The Club's coveted “Rubes” is a distinctive statue; it was designed by the late Rube Goldberg, the cartoonist, sculptor, author, engineer and inventor. Goldberg crafted "the Rube" to represent his conception of a “dead line.”


The Deadline Club in New York City is one of the largest chapters of the Society of Professional Journalists. Its members include professionals working in broadcast, print, online and journalism education. The Club maintains the New York Journalism Hall of Fame and elects and inducts its members.

The most important mission of SPJ and its chapters is fostering and defending freedom of the press under the First Amendment of the U.S. Constitution. SPJ sends its constitutional lawyers to the aid of journalists who need assistance in exercising their rights. The Deadline Club has been serving the cause of New York City journalism for nearly 80 years.