Check out this lovely item posted in the February 2011 edition of NLGJA News, the webjournal of the National Lesbian and Gay Journalists Association. If the links above do not work, copy and paste this URL (http://www.nlgja.org/nlgjanews/archives/314) in your browser. 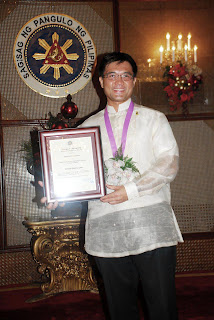 This news item includes a photo of me and His Excellency Benigno S. Aquino III, president of the Philippines.
Also, according to the NLGJA staff, "Oriol Gutierez has written a timely piece on NLGJA's need for more diversity, and a call for leadership to lead in the effort. Doug Stewart brings us an update on the progress of their newsroom, which recently combined print and broadcast under one roof. Is it succeeding? What works and what doesn't?"


I wish to send my heartfelt congratulations to Michael Luongo who won five awards from the North American Travel Journalists Association 2010 Awards competition, including the NATJA 2010 Grand Prize for Travel Journalism, based on a package of work covering Iraq, Palestine and other Middle Eastern desginations. Bravo! -- Gener
Posted by Unknown at Tuesday, February 15, 2011 No comments: