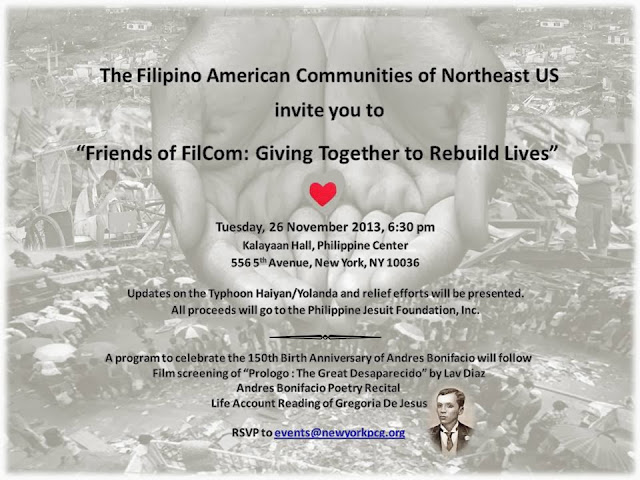 
NEW YORK |  November 30 is a public holiday in the Philippines. Why? It is the day Andres Bonifacio, the de facto national hero of the Philippines, was born.

The "official" national hero, as was designed by the Americans, is Jose P. Rizal. Bonifacio founded the Katipunan movement which sought armed independence of the Philippines from Spanish colonial rule and started the Philippine revolution.

Many advocates consider Bonifacio to be the "real" first President, although he is not recognized as such in the history books. The reasons are too complex for a blog post to unearth. Suffice it to say that the more popular recognition of Rizal as the Philippine national hero has no explicit legal designation in Philippine law. As a consequence of our colonial past, my native country officially celebrates two holidays in memory of two national heroes: Jose Rizal, the more famous patriot, and Andres Bonifacio, the underground hero.

I would like to invite you to the Philippine Consulate General of New York's 150th anniversary of the birth of Andres Bonifacio. The Consulate originally scheduled it for December 2, but then it moved it up to Tuesday November 26 to coincide with a Friends of FilCom fundraiser to benefit the victims of Typhoon Haiyan/Yolanda in central Philippines. 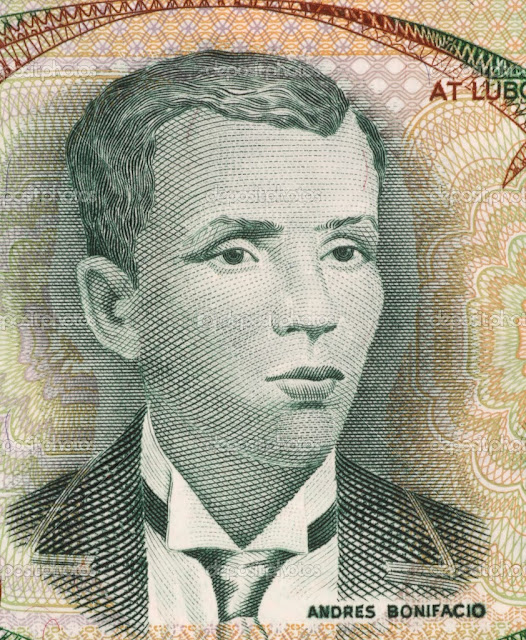 FilCom stands for the Filipino American Communities of the Northeast. The Consulate is hosting a simple reception for this fundraiser, with the Bonifacio Day celebration as the evening's entertainment. The Consulate will update the New York community of the developments of the typhoon, relief efforts, government and international aid. That is the first part of the evening. Donations to the fundraiser, as the flyer above states, will go to the Philippine Jesuit Foundation.

The evening's second part (the entertainment) will consist of a poetry recital, a life account reading by the actor Debralee Daco (HERE LIES LOVE), and a film screening of an austere short film by Lav Diaz, one of the greatest Philippine film auteurs of all time.

I will deliver a performative recital of a poem written by Andres Bonifacio. The wonderful actor Debralee Daco will interpret the role of Gregoria De Jesus, the wife of Bonifacio. Daco will read from De Jesus's autobiography, an account of her life with her husband.

Both the poem and the Daco's reading from De Jesus's autobiography function as contextual material for the evening's film screening: a 30-minute short film, Prologue to the Great Desaparecido. It is Lav Diaz's introduction to his most important upcoming feature film The Great Desaparecido which questions truth and history around Philippine Revolution and Philippine Independence.


In Prologue to the Great Desaparecido, we find Gregoria De Jesus searching for the body of Bonifacio in the mountains for 30 days. She calls for Bonifacio. She calls for the spirits even to help find her husband. It has been 325 years that the Philippines was under Spanish colonial rule when the Revolution, led by Bonifacio, exploded on August 21, 1896. On May 9, 1987, Bonifacio was charged with a death sentence by counter revolutionaries led by Emilio Aguinaldo, a Filipino general who later appointed himself the first President of the Philippines.*

All this said, Debralee and I wish this evening will nevertheless be enlightening, edifying and in aesthetic terms entertaining. We also hope it will serve as a prologue to Lav Diaz's Prologue.

Lav Diaz, you see, is considered "the ideological father of the New Philippine Cinema.” He began directing in the Philippine commercial film industry in the 1990's. But he received greater attention for films with clearly independent, socially conscious and artistic intentions such as Kriminal ng Baryo Concepcyon and Hesus Rebolusyonaryo.

After leaving the industry, Diaz sought to create his cinema on his own terms. Like the Danish auteur Lars Von Trier, Diaz's reputation rests on path-finding epic films. Beginning with the five hour Batang Westside in 2001 which won the Best Asian Feature at the 2002 Singapore International Film Festival -- followed by later films (such as the landmark near 11-hour Evolution of a Filipino Family, the nine-hour Heremias Book 1, Death in the Land of the Encantos and the seven-hour Melancholia (2008 Venice International Film Festival New Horizons Best Film) -- Diaz has used his long-form cinema to question the very nature of cinematic time and space.

His films also makes us aware of the inherently commercial nature of film-making. Most importantly, the very un-commercial nature of his body of work raise the notion of cinema as a possible tool for involvement, investigation, mourning, healing, remembrance, meditation, confrontation and action for his fellow Filipinos.


*Footnote: Historians have condemned the killing of Bonifacio as unjust. Bonifacio did pose as a threat to the Revolution, because a split in the rebel forces would have resulted in almost certain defeated to a united front against the Spaniards. But historians have noted that the trial of Bonifacio was politically rigged. The Cavite leaders, led by Aguinaldo, wanted to wrest control of the Revolution from Bonifacio who exerted a spiritual reign. In other words, he had to be eliminated. Class played a significant role too. Aguinaldo represented the upper class and Bonifacio the middle and lower classes.