Once upon a time, in a desert far far away, I dreamed of becoming a movie critic.

Not just any movie critic: I hoped to follow the footsteps of Roger Ebert.

I wrote voluminous movie reviews for a university newspaper called Sagebrush and doubled as the chief movie critic of a Gannett–owned newspaper, the Reno Gazette-Journal. I was an enormous fan of Roger Ebert's writings.  Because of their clarity, erudition and good sense. It was as if he were writing very candid letters about the movies, which he intended only for me.

Ebert, who died of cancer Thursday April 4, 2013 at age 70, was a gifted stylist, but he wrote above all to be understood. He did not believe in being flashy or academic or verbally show-offy or richly aphoristic — and yet he never failed to articulate complex ideas and high-level thinking. The first movie critic to receive the Pulitzer Prize for arts criticism in 1975, Ebert wrote with sharp wit and blistering intelligence, but there was something easygoing and playful about his energetic prose. When you pause to think back on what he had written, you realize that he wasn't just telling you whether he liked a movie or not. He was also conveying his larger notions about movie aesthetics.

Anyway I wrote letters to Ebert. I wanted to know how he did "it."

To my surprise, Ebert responded back. Well, one of his people did.  A thick envelope appeared in the mail one day. It contained a form letter and several pages of frequently asked questions. The form letter explained that because of his intense moviegoing schedule, Ebert could not possibly respond to every single letter. Most letters he received, though well-intentioned and sincere, repeated one another. So he had prepared a packet that contained his responses to typical questions he was asked. 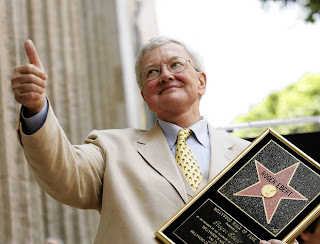 Mind you that I was shocked that Ebert responded at all.  In the 1980s, critics on television were all the rage. Among the reviewers who put television criticism on the map, Ebert was the only one who cared enough about his admirers to put some thought on how he would engage with them.  Gene Shalit, who reviewed for NBC's "Today Show," never wrote me back.  (He was probably too busy scaring up bad puns and grooming his scarier moustache.) Joel Siegel, a longtime movie critic for ABC's "Good Morning America," returned my letter with hastily penned notes in the margins, saying he was too busy to give a proper reply.

It was a different case with print critics. Sheila Benson of the Los Angeles Times read my articles and gave me literary feedback. Pauline Kael of the New Yorker wrote me encouraging letters and phoned me at home to commiserate when I ran into trouble with the newly hired features editor of the Gazette-Journal. (The editor objected that my Top 10 List of Best Movies of the Year had too many esoteric films like Women on the Verge of a Nervous Breakdown and The Unbearable Lightness of Being. "What about Twins?" the editor asked, referring to the movie starring Danny DeVito and Arnold Schwarzenegger.) The drive-in movie guy Joe Bob Briggs, whom Ebert dubbed one of the "supporters of the decline of civilization," mailed me political buttons, red-white-and-blue ribbons and professionally designed car stickers, because he was campaigning to be elected the next president of the United States.

I remember the first time I wanted to become Ebert. After seeing Milos Forman's Amadeus at the two-dollar movie theater, I turned on the television in my bedroom to watch a pair of Laurel and Hardy types fulminating about the sorry state of Hollywood and touting the rising significance of American indies. The syndicated show was called "At the Movies." The dueling TV critics were named Gene Siskel and Roger Ebert. Sometimes I thought of them as the Bert and Ernie of movie criticism. Because they fought and argued like brothers — who always patched it up in time for the next episode. Television lent their thumbs-up/thumbs-down reviews great authority and legitimacy. Television made them the most powerful film critics in the nation.

I preferred Ebert's lean, poetic writing over Siskel's blunter style. I admired Ebert even though for years his reviews hogged the pages of the Gazette-Journal, shunting mine aside.  Because the Gannett-owned paper I worked for had paid for the right to reprint their syndicated reviews, my editors preferred using their reviews — more frequently: brief capsule reviews — over my reviews.  That meant that I needed to be really enterprising if my reviews were to take precedent over the syndicated stuff.  (For example, I contacted the owners of the local art house so that I could arrange to screen their films in advance of their local release. Covering their art films allowed me to write reviews with a more local angle. )

Because I filed copy at the city desk every week, I had access to all of Ebert's syndicated reviews — especially those that did not see print.  At some point I had become so obsessed with Ebert's film criticism that I started to make fun of him in print. I was pretty good at it, too. I wrote a piece of film commentary for the campus newspaper — which ridiculed Siskel & Ebert (see photo above) — that was a hit.  It grabbed the attention of the editors of U. The College Newspaper, which picked up and re-printed articles based on hundreds of campus newspapers from across the country. Someone entered my article for consideration for a Society of Professional Journalists Mark of Excellence Award for best campus writing, and it won first prize in the opinion writing category.

Of course, the reason my article was such a big hit might have nothing to do with my writing. It was likely because it was accompanied by a hysterically funny cartoon.  The gifted cartoonists Paul Horn and Mark Nowlin illustrated Siskel & Ebert not just at each other's throats — they were sticking their thumbs inside each other's noses! My opinion piece was, in effect, an extended caption. It was a no-holds-barred broadside against the meaninglessness of the star-rating system — the dumbed-down advertising-pandering mentality that became a desperate byproduct of Siskel & Ebert's zero-sum, gladiatorial game of passing judgments.

So when Ebert eventually wrote me back with a smart, thoughtful and quite instructive package that offered greater insight and background into his film-criticism career, I had started to feel this intellectual and emotional distance from Siskel & Ebert.  They had begun to see more like sacred cows to take down rather than critics to put on a pedestal. That letter from Ebert instantly broke down that gap. I had succeeded in moving one step closer to the Master. It turns out that he wasn't all the bad. All the cynicism I had harbored went away. I admired him even more. That letter brought back the human being behind the TV stranger. Truthfully it also lessened the pain of the Gazette-Journal editors choosing Ebert's capsule reviews over my own writing.

Ebert's form letter was not completely pro-forma. It was personalized. Ebert told me that he had started out exactly as I had; he was an opinions columnist for The Daily Illini, the college paper of the University of Illinois, where he received his undergraduate degree.  (One of the first movie reviews he ever wrote was a review of La Dolce Vita, published in The Daily Illini in October 1961.) He added that if I liked, he would autograph one of his books for me. All I had to do was mail the book to him, he would sign it, and he would mail it back.


Remember: Ebert was by then rich and famous. I bet he hired people to answer his mail; all he did was sign his name. I did not honestly believe he would mail back any autographed book that I would send him. So I decided to grab his attention.

Instead of asking him to autograph one of his movie books, I got personal. I sent him my copy of his book An 'Illini' Century: One Hundred Years of Campus Life, which details the history of the University of Illinois from 1867 to 1967. It was Ebert's first book.

What can I say? I charmed Roger Ebert! The man autographed the book with a personalized note. He mailed it back. In between the pages was a handwritten letter; he expressed his great appreciation and well wishes. He told me to have confidence in myself — and to never give up.

I still keep that letter from Roger Ebert. It traveled with me when I moved to New York City after college to become a writer.